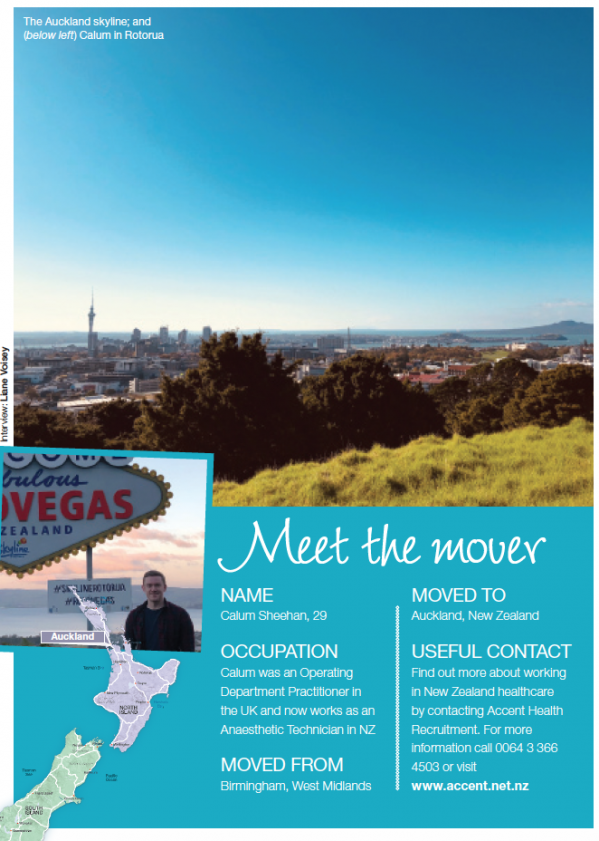 Calum Sheehan - Featured in the Down Under Magazine, Jan 2020

I wanted to live in New Zealand because of the lifestyle and it was always a country I had wanted to visit.

I love the outdoors, sport and a laid back life, and these were all things I thought New Zealand could provide.  I had a small bit of knowledge about the country, mainly through watching sport and reading travel books before I came out, but I also did lots of research, including online, looking at YouTube videos and travel guides.

I came on a working holiday visa, however I have since applied for a Work to Residency visa. My expenses for the move were not high. I came with just a suitcase full of clothes, and I only had to pay for the visa, professional registration, flights and initial accommodation. My working holiday visa cost just under £150, my professional registration cost £200 and I found a good one-way flight deal for £400. I also saved money to help me to get started in NZ.

I had moved to Australia, for a year, six years ago, so I had a bit of experience in what I needed to sort out. Plus, the recruitment agency who helped me to find a job here, Accent Health Recruitment, were great in providing tips and advice, via email or Skype. Planning and research was key in this process being easy, in my view. The professional registration took a few weeks to sort, just because of the amount of paperwork I had to acquire. Once I had my registration sorted, I had an interview and a job offer within two weeks.

I arrived in New Zealand at the beginning of May 2019. The settling-in process was fine and didn’t take long. I started off in an Airbnb, and spent about five weeks looking for places to live until I found the right place. I then had to buy a bed and other room furnishings.

My employer was great with helping me to settle in. Everyone was friendly and helpful, and the orientation process was a smooth transition, despite going from working in a public hospital to a private one, as well as working in a different clinical setting, learning about different policies and cultural differences.

I live in Remuera, where I live in a house share. It’s close to work, close to a beach, and backs onto a nature reserve. The property I live in is two-storey with four bedrooms, two bathrooms, a double garage, a big  open plan living room and kitchen, and a big window and balcony. Remuera is an affluent inner city suburb, and is fairly quiet; with mainly working professionals and families living here.

On a typical working day it is a five minute drive in to work, an eight-hour hour shift in a hospital, followed by a visit to the gym or cinema, going for food or a walk by the sea if the weather’s nice. My weekend involves exploring Auckland city and its surrounding islands, driving out of the city for coastal or national park walks, watching and going to sport events, socialising and enjoying the numerous ice cream shops! I bought a car, which helps massively for exploring and day-to-day activities! I spent a weekend in Rotorua looking at all things geothermal, and had an amazing five-day skiing trip in  Queenstown, on the South Island, which I enjoyed the stunning scenery, and sampling the local food and beverages.

The weather here is much better than the UK. Although the winter was very wet at times it was never that cold. I was still wearing shorts on sunny days in winter here! Local facilities are plentiful, with supermarkets, shops, restaurants, petrol stations close to where I live. Life feels much more relaxed here. I live 10 minutes drive from the sea and beach, 20 minutes drive from watching the best rugby team in the world, 40 minutes from rugged, stunning coastlines, and an hour and a half flight from skiing/amazing nature. None of these were possible living in the Midlands!

The food here is pretty similar to the UK. There is lots of Asian-influenced food here. The nightlife is a lot quieter and it’s more of a pub/bar scene than clubs, which isn’t a bad thing. The curry is different here, and doesn’t compare to what I used to find in Birmingham! With spring arriving, and the weather starting to get better,  I have done plenty of day trips outside of Auckland, as well as having plenty of trips planned for the upcoming months to different parts of NZ and over to Australia.

It has been very easy feeling part of the community here. The Kiwis are really friendly and helpful. It is difficult being so far away from friends and family in the UK, but all the good things about living here balance that out easily! As for the future, I plan to stay in NZ and see what happens. I’m very much into taking it as it comes at the moment.

My advice for other British people wanting to move to New Zealand is to just do it! Even if it’s only temporarily, it’s a great experience. New Zealand is a stunning country with a great culture. It’s so laid back here and the Kiwis are very friendly. If you love the outdoors this is the place for you! My advice would be, if you decide to come out to New Zealand, try to plan for all eventualities and have contingency plans in place, along with some patience and resolve, as it can require some effort at first to become settled.

WHY MOVE TO AUCKLAND?

Over 1.5 million people live in Auckland, a third of New Zealand’s population. This vibrant city is situated near the top of the North Island and is surrounded by stunning beaches, bush clad mountains and farm land. Set amongst volcanic islands and a multitude of harbours, it’s easy to see why this beautiful city is known as the ‘City of Sails’.

Auckland is considered one of the world’s most liveable cities, ranking third in Mercer’s Quality of Living surveys since 2011. It is the region of choice for over half of new migrants. They’re drawn here by the job opportunities, good climate and stunning natural environment. Aucklanders can choose between a sophisticated urban lifestyle, living in the suburbs, or moving just a short distance away to the coast, bush or countryside for a more relaxed outdoors-orientated lifestyle.

Almost half of New Zealand lives and works in or near greater Auckland, so there are jobs in most industries, but particularly in medicine, engineering and IT. Highly skilled and experienced managers and professionals across a number of areas are in high demand, accounting for about 50 per cent of employment growth.

To find out about the latest  job vacancies in Auckland visit www.trademe.co.nz and www.seek.co.nz.

Auckland has three universities and two technical institutes, as well as a range of private and state secondary and primary schools. Auckland University also ranks in the world’s top 250 in the 2019 Times Higher Education’s world rankings.

Private cars are the dominant mode of transport in Auckland. Public transport relies on buses, with train services to the south and west of the city, and ferry services connecting the city centre to suburbs on the North Shore, in the West, South East and islands.

Auckland is spread out over a large area, with a mix of established and new property, ranging from timber-built standalone houses to city apartments.

The housing market in Auckland is competitive and the cost of renting or buying here is high. Be prepared to look hard and act quickly. You can search for houses at  www.trademe.co.nz and www.realestate.co.nz. Auckland has the country’s most expensive housing with an average house price of NZ$825,000 (£476,534), according to Global Property Guide.

Article originally published in Get Me Down Under's Australia and New Zealand Magazine, January 2020 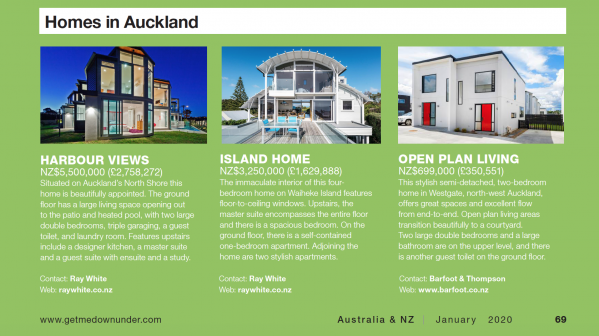