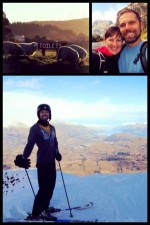 My name is Chris, I am an emergency physician. I came to NZ in March, from Canada.

The process to come to NZ took me about a year from when I first contacted Accent to when I started work in Invercargill.

The easiest part of the process was working with Prudence and the other Accent staff - they were always quick to respond to any questions and helped me know what the next step would be as the process unfolded.

The most challenging part of the process was all the paperwork that had to be completed to get my medical license. This was especially difficult because I had worked as a locum all over western Canada and I had to account in detail for all the time, all the hospitals, all my duties, with letters of standing from all the various health authorities, etc.

My first impressions of NZ were that the people were very relaxed, friendly, and easy-going. My wife immediately fell in love with the thousands of sheep we see everywhere we go. The weather is very moderate compared to Canada - in the summer a very hot day could get into the high 30s (Celsius), and a very cold winter day could reach minus 40 or 50. The summer here is more like our spring, and the winter is more like our fall. Consequently we seem to spend much more time outdoors than we did back home.

The best parts of NZ is the natural beauty and how accessible it is. We are on the South Island and we are 20 minutes from the ocean, and 2 hours from the mountains and skiing in the winter. Four of New Zealand's nine "Great Walks" are within a few hours' drive of where we live. I also really love the people, particularly their good humor and helpfulness.

What I miss the most about Canada - in Canada although the weather can be chilly, it's always warm inside because the houses are very well insulated and quite cheap to heat compared to NZ. In NZ, although the weather is quite temperate, homes tend to be the same temperature inside as outside. This necessitates things like heating blankets, something I had never seen before coming to New Zealand! Also, I miss little things like the flavour of our North American ketchup. The NZ equivalent, known as tomato sauce, has a similar appearance but the taste is quite different.

My advice if you are planning to come to NZ is: bring as many electrical adapters as possible, or, even better - pack a power bar to plug in all your electronics - that way you can plug in numerous items and only require one adapter. Also, for various reasons, including the recent strength of the NZ dollar, we found that many things in NZ are quite a bit more expensive than in North America. Once you start earning NZ dollars this becomes a bit less of an issue, and the strong NZ dollar is great when traveling overseas, but I would recommend setting aside plenty of money so you can afford whatever you need to buy when you first arrive (for example, a vehicle).

Anything else you would like to say: There is a lot of stress associated with moving to a new country and adapting to a new way of life (even for a country like NZ which is very similar in many ways to other parts of the English-speaking world). Despite that, I would highly recommend coming to NZ for a year for anyone who is able to do it - and I have met many people who came to NZ from North America or the UK and loved it so much they now live here permanently.

Are there any major similarities/differences between your current role in NZ and your previous role in Canada' In general Emergency Medicine is quite similar compared to Canada, however the NZ medical system is very frugal compared to back home. This is often quite a sensible approach and it dramatically decreases the number of unnecessary investigations or interventions compared to what is seen in some parts of North America. However, there are occasionally situations where a test or treatment IS appropriate but it requires considerable effort on the physician's part to get it done in a timely manner.

Many medications are the same ones that we would use back home, however there are many medications which are different, either different formulations, or completely different medications; this is something which does take some getting used to, but it was not as big a challenge as I feared.

A great source of pleasure for me at work is the patients. They are almost always grateful, good-natured, and very stoic. Generally they seem to want to avoid medication if possible. Abuse or addiction to prescription medication is extremely rare where I work in New Zealand, whereas this was a constant source of stress for me when I was working in Canada. Also, patients rarely come to the ER seeking a "quick fix" for a given problem - they mostly just want reassurance that there doesn't appear to be anything dangerous going on.